What is thyroid eye disease?

Abnormal activity of the thyroid gland in the neck (be it over- or under-action), may lead to inflammation in the delicate tissues within the orbit (the eye socket). This inflammation is a form of immune ‘auto-reactivity’, but the exact factors which link thyroid disease and TED remain uncertain. TED usually affects both eyes (although often this may be to an asymmetrical degree), with women being affected more often than men.

When does TED occur?

The inflammatory period in TED can last up to two years, and may occur:

(i) any time after a diagnosis of thyroid dysfunction, or:
(ii) before any thyroid changes are diagnosed, and, rarely:
(iii) without there ever being evidence of abnormal thyroid function

What are the symptoms of TED?

Most patients with TED experience only mild symptoms, such as dryness or irritation of the eye, and others with the mildest form of TED may be unaware of any eye problems at all. In those with significant inflammatory changes, the following symptoms may occur:

What is the treatment of TED?

In the great majority of patients, TED follows a mild course and artificial tears and / or anti-inflammatory drops alone may suffice to control symptoms. In all patients, thyroid control should be optimised, and smoking – a known risk factor for severe disease – should be stopped. Oral Selenium supplements are now considered beneficial in mild forms of disease.

Although the inflammatory phase in TED is typically self-limiting, lasting between one and two years, active orbital inflammation must be treated to avoid debilitating long-term complications (these including eyelid retraction, double vision, proptosis – protrusion of the eyes – and loss of vision). Current treatments to manage active orbital inflammation include oral or intravenous steroids (or other immunosuppressive medicines such as Azothioprine), and low dose orbital radiotherapy, which is considered to reduce the need for (and therefore the risks of) systemic immunosuppressive treatment.

A very small proportion of patients suffer with marked inflammation and do not respond adequately to the treatments referred to above. In these patients, urgent surgical intervention (within days or weeks) may be necessary to protect vision. This surgery is called ‘orbital decompression’, because it relieves the inflammatory pressure around the eye and the optic nerve behind the eye.

Other surgery, including operations to treat bulging eyes (proptosis), double vision and abnormal eyelid height or fullness, are usually performed once the disease has settled. Since orbital decompression surgery (to treat stable proptosis) can affect both double vision and the appearance of the eyelids, this surgery, when required, should be performed before eye muscle or eyelid surgery.

When is an orbital decompression required?

An orbital decompression is indicated in the following circumstances:

2. High orbital pressure with engorged blood vessels and raised intraocular pressure (secondary glaucoma) – surgery may be required within a matter of months.

3. Stable proptosis (‘bulging’ eyes) – if desired, a‘cosmetic’ decompression surgery is planned once the degree of proptosis is stable for a minimum of six months, with optimum thyroid control and cessation of smoking. Preoperative photograph of a patient with stable proptosis Photograph of the same patient following an orbital decompression

What does orbital decompression surgery involve?

The purpose of surgery is to relieve orbital pressure (and thus improve orbital blood perfusion), and increase the available space for the orbital contents (allowing the eye to settle back to a more normal position within the socket).

Surgery is usually performed under a general anaesthetic, typically with a one to two days stay in hospital following surgery before being discharged home. The amount of surgery required is influenced by the severity of disease and degree of proptosis. Of the four ‘walls’ of the orbit, the medial (inner), lateral (outer) and inferior (floor) can be decompressed and some fat can be removed from the orbit. Incisions are made within the conjunctiva on the inside of the eyelids or in skin creases in the eyelids to hide or camouflage surgical scars.

What is the rate of recovery after orbital decompression?

Orbital decompression is a major operation, and the scale of surgery should not be judged by the small incisions involved. Thus, although the skin incision settles over a few weeks, natural repair of the deeper tissues can take many months, and accounts for occasional deeper ache or discomfort during this healing phase.

Immediately after surgery a firm pad is placed over the eye(s), and is removed by the doctor or nurse the following morning on the ward. Oral antibiotics, a tapering course of oral steroid tablets, and eye drops are provided before the patient goes home, typically one to two days after surgery.
Swelling and some bruising of the eyelids can develop in the week following surgery, and this swelling can take a few months to settle completely. As the natural drainage of tissue fluid occurs from the outer corner of the eyelids, fullness of both the upper and lower eyelids is more common after surgery to decompress the lateral wall or the floor.

Double vision may occur, or worsen, during this healing period, and can require subsequent surgery to re-align the eyes. Thus, driving and working following surgery may be delayed by several weeks, and this should be taken into account when planning treatment.

What are the possible complications of orbital decompression?

As with all surgery, side effects of orbital decompression include infection, scarring, and swelling. Specific side-effects can include a decline in vision, double vision and a change in lid height or position.

With lateral wall decompression, hollowness over the bony lateral wall and a sensation of eye movement with eating can rarely occur – these tend not to require intervention.

With decompression of the orbital floor (this being undertaken only in patients with more severe proptosis), numbness over the upper cheek and upper front teeth can occur, and in the great majority of patients (over 90 %), this recovers completely.

All forms of decompression surgery carry a risk of permanent visual loss, the risk of this (per eye) being in the region of 1 in 1000. In patients with visual loss before surgery visual recovery may be incomplete.

The following applies to 2- and 3-wall decompression only:
Because drainage of the air sinuses around the eye may be temporarily affected, nose blowing, flying and scuba-diving MUST be avoided for at least 3 weeks after surgery. Rarely, surgery to improve sinus drainage is required after orbital decompression where medical treatments do not help.

With all surgery, there remains a minute risk of neurological injury, and indeed to life itself, this being either due to anaesthesia, surgery, or a combination of both. As with all surgery, the possible risks versus the benefits are very carefully considered for each and every patient before surgery is arranged.

I suffer from TED – who else can I talk to?

The British Thyroid Foundation (BTF) supports people with thyroid disorders and is for anyone who wants to know more about thyroid disease in general.

Thyroid federation international (TFI) is an umbrella organization for thyroid patient organisations all over the world. 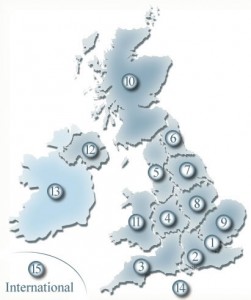